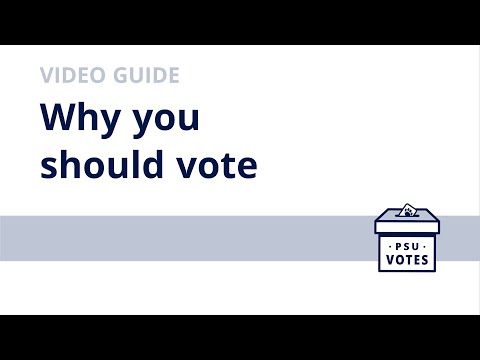 Voting in local, state, and national elections is one of the most important duties of an engaged citizen. Young voters have the power to sway an election. College-aged voters account for almost one-third of the eligible voting population.*

Penn State encourages eligible students to be engaged citizens by participating in elections and understanding the issues that affect them today and in the future.

What is it important to vote in a primary election?

Each state holds a Primary Election between March and September to nominate candidates for the subsequent November General Election. Primary Elections allow voters to select the major party nominees for each public office for which there is an election in November.

Each Primary Election helps determine the next in line to manage our governmental institutions and should be of great interest to all citizens.

Why is it important to vote in a non-presidential election?

The outcomes of these elections can have a huge impact on the day-to-day workings of your community. As a Penn State student, you have the option to register to vote using your local address where you live for most of the year and where many issues have an impact on you while you live here.

Municipal and county elections decide positions, such as County Commissioners, District Judge, Borough Council members, and more. These are the officials that make decisions on issues, such as affordable housing and rental properties, buses and transportation, parking, law enforcement, public safety, etc.

*According to a Pew Research Center analysis of U.S. Census Bureau data in 2016.